Possibly one of the emotionally charged topics in the language learning world (and one that no one has good answers to, myself included) is the topic about how many languages a human being can learn.

We will never know the answer to that questions for way too many reasons. Here are some of them:

We will never know the answer to how many languages a human being can possibly know, and I highly encourage you to distrust ANYONE who tries to come up with an answer to the question. Because in attacking the question, they get the methodology wrong for all sorts of reasons.

Here are some of them:

I get it. A lot of people have deep insecurities, including many in the polyglot community. The temptation to knock others down or be dismissive only shows defensiveness and maybe a poor attempt to hide your own imposter syndrome. This is why I’m willing to consider anyone’s language proficiency based on claims alone (note I said “CONSIDER” not “definitively judge”, because there is no way to really do that.)

If there is a definitive limit for amount of languages learned, even to a high level, we will never know what it is, in part because of all of the factors that I lay out here.

It’s an interesting mental exercise that, let’s be honest, is usually used to discourage people and create skepticism so that some people can have their egos buttressed, but it’s one with no definitive answer (in the Talmud, we end such debates with the word “teyku”, meaning “let it remain unresolved”. And that’s what we’re going to have to go with this debate as well.)

What do I intend to do? Well, for one, I’m going to try my best and learn many languages, some to fluency, others to degrees of curiosity, and I fulfill MY vision. Because if you constantly live in the fear of judgment of others, you’ll never live your full life.

And that’s something you deserve to do! Don’t let ANY discouragement get you down! 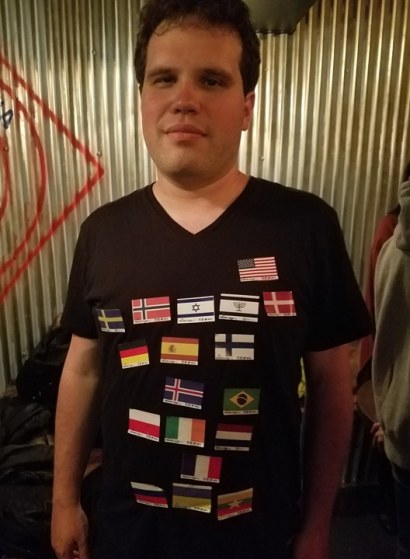 I really need to start using new pictures of myself.

No, the answer is not “settle for less”. Perish the thought!

Yes, I am aware that there are some polyglots out there that think about “how many languages it is possible to know” and while I admire the work of all of them in helping other people fulfill their dreams, I think that posturing out that topic is pointless.

There are just too many variables at hand and often I’ve noticed a lot of them address the topic in very defensive terms (e.g. if my friends say it takes X amount of time to reach level Y, that’s what it is. Done. Don’t argue with it).

I’m amazed by the human mind and I think that we haven’t even harnessed 1/10th of its true power. Given how much of my career I’ve spent flying in the face of the word “can’t”, I’m going to continue to do so and give no regard as to how many “can’t”’s or “won’t”’s I hear about.

Personally, I may want to learn 100 languages of the course of my life. Who knows? Maybe new technology would make it possible. You can never be too sure!

Right now, however, I’d like to address a topic that WAY too many people have asked me about: namely, “I want to learn (lists twelve languages)”, and I really want all of them but I can’t choose! Help!

The one thing you should definitely know is that it is possible to sate your curiosity.

If you want to get on the road to being a polyglot, I would recommend the following course of action that I heard about from the one-and-only Olly Richards (someone who I have to thank for my success!):

30-minutes a day -> your dream language.

Engage with it in some fashion.

Right now, I’m focusing on Hungarian during my time that is not spent in front of a camera. This means that while I’m in the subway, I’ll be listening to Hungarian language learning materials and soon I’ll be able to graduate to music and podcasts before I know it.

If I’m sick of listening to things or looking at screens, I have book as well. If I need a break from work, I have the fantastic world of television and cartoons to explore in Hungarian. My Facebook and Pinterest accounts are currently translated in it.

So feel free to pick the one that pulls at your heartstrings the most (ask yourself!) and set aside a routine. Set up decorations in your room or on your desktop wallpaper to remind yourself. Set up “reward loops” (e.g. 15 days in a row of my 30-minute routine and I get a new book / video game / phone / fancy dinner)

However, during this time, you probably have the eleven-odd other languages that I want to learn at least a little about, and so I’ll write some techniques to keep you “sated” during that time.

As of 2017, Memrise’s Mobile App can be significantly less stressful than the Desktop App (even though the Desktop version is higher reward, I should say).

As a result, use it to explore various languages that are “on your hit list” while you’re focusing on the one you want most.

It will give you an extraordinary head start when you actually decide you know your other languages well enough to start focusing on a new one.

This will help you learn about the various places attached to your dream languages (although there are a handful of languages with which you can’t really do this, Esperanto comes to mind immediately because it was deliberately designed to be a language rooted in no specific place).

If you can go to the library, go to the travel section and read about these places there. The place-names will definitely help you learn the local language to a small degree of manageable bites. There may also be phrasebooks incorporated not only in the appendices but also throughout the text sometimes!

Yes, some languages have more difficult pronunciation than others, but this is definitely the easiest part of learning a language (in my opinion) and virtually impossible to forget (according to my experience).

You may not be able to learn 11 languages at the same time very effectively (although maybe you can! If you have a routine, let me know!) but you would definitely be able to master their pronunciations, especially if they are phonetic (which the majority of languages in the world are. For those you don’t know what phonetic is, this means that words are always spelled the way they are written. English is not Phonetic. Every Creole Language I’ve ever encountered is…well, those that have standardized written forms, that is).

Learning the new words of a new language takes significantly more work than actually paying attention to the grammatical quirks of a language.

I’m not really actively learning Khmer at this point, but I’ve been paying attention to the sentence structure and what sort of grammar I can expect when I actually dive into the language.

This is especially helpful if the grammar has a notorious reputation for being impenetrable (such as those of the Finno-Ugric Languages).

Oh, and those “suffixes” that I actually spoke of are the cases. That’s really all that those 15+ cases in those languages actually are. Most of them are straight-up prepositions. I bet you entire worldview has changed now, hasn’t it?

Right now on my desktop I have a huge document of all the languages I’d like to learn in my lifetime. It is way too large, and who knows if it is actually realistic or not (most of my friends would probably say it isn’t, although I don’t intend to learn all of those languages to fluency…)

But one thing that would help you “sate your thirst” is making a list, given that it will make you more attentive to your long-term goals, as well as pay more attention when the language or culture comes up in conversation with your friends or at a meeting.

But what if I want to actually learn eleven languages at the same time?

Granted, nothing is stopping you, although perhaps you are likely to get burned out easily. I’ve certainly tried that once and felt it.

However, one thing I’ve noticed even during that not-particularly productive time is that I tended to focus on a handful of languages within the eleven that I was learning. This may come to happen by default, because equally loving eleven things is going to come by with difficulty.

You’re welcome to try it, but unless you have extraordinary mental discipline it would be like walking into a tornado, and while you’d make progress with all of the languages you’re studying at once you’d feel as though it is just a bit slow.

So I would definitely recommend studying one or two at once and sating your curiosity with the rest of them using the methods above and with tiny pieces here and there.

That said, I’ll conclude with one thought: that it is possible to get your brain to do almost anything if you can somehow trick your brain into thinking that the skill you want to learn is essential to your survival (think about how often you may have forgotten a VERY important address, for example…)

Keep in mind that none of the theory that I present in this article is absolute, and I’m very much open for debate in all of this.