Not all news in my language endeavors is good. Last night at the Polyglot Bar I felt as though I deliberately dealt a sub-par performance.

How? Well, for one, I caught myself mixing up Spanish and Portuguese, and in Portuguese I kept switching between the European and the Brazilian varieties without able to distinguish them well.

Up until my New York City residence time, I only used various Portuguese’s with native speakers (e.g. the guy who lived in my building in Heidelberg who had a Portuguese flag visible through the window, Brazilian friends, and so on). Now that I am dealing with students, I should probably keep in mind to use the Brazilian accent only, but sometimes slip-ups happen. And it is a lot easier to mix up the two Portuguese’s than it is to mix up Spanish and any variety of Portuguese.

My Dutch attempts were better, but I still felt as though I was sometimes grasping for simple words. And between German and Yiddish I did something interesting: I used as many words from “Loshn-koydesh” (“the holy language”) as possible with speaking Yiddish, to ensure that not an ounce of Deitschmerish would have a hope of creeping in. But having to juggle them jointly still was an issue.

And this is very odd when I consider the fact that, while I did use some Norwegian and Danish at the Swedish conversation hours in Heidelberg, I didn’t actually mix up the languages. And even if I accidentally did, then it certainly didn’t elicit any reactions from anybody in any direction.

Looking back as to my beginnings with the Scandinavian Language, I remember Ulf, a priest in the church of Sweden, giving us a rundown as to how Danish, Swedish, and Norwegian differ from each other in terms of their pronunciation and register. And this was before I even considered learning any of these. As a result, from the very beginning, I but these in different groups, and my accents between the three are cleanly cut and I have been told this summer that my Scandinavian accents are impressive, especially the Norwegian one.

So, I have a problem:

I mix up Spanish and Portuguese and the West Germanic Languages (German, Yiddish, Dutch, and yes, English)

What am I going to do about it?

Maybe I just had a bad night. But I’m not going to use that as a cop-out.

I have to create a zone for the various accents, the way that I learned to do with the Scandinavian Languages since the beginning. Back when I first learned Spanish in high school, I didn’t really have any “accent zone”, nor did I even know the concept. Now I know better.

So…this means that I have to consciously speak aloud to myself (or, better yet, with others) and make sure to use a European Spanish accent ONLY. Thanks largely to watching dubbed cartoons, I can be cognizant of the differences between European and Latin Spanish and adjust my speech accordingly.

Now for the Portuguese, it is a bit difficult. I will have to force myself into speaking like a Portuguese person and like a Brazilian, and tease out the zones so far so that there is no overlap. Again, the only way that I am going to manage this is by talking out loud.

I remember how I learned the Danish Stød by practicing it on while crossing the street but also in the shower, getting dressed, etc. I will have to use that time in order to rehearse these accents accordingly. This is a problem that I have, but it is capable of being fixed with discipline.

I also have to develop stronger association with these languages.

I have a confession: when I speak Norwegian, it is only a matter of a few seconds until I think of Max Mekker, the infamous Big Bird equivalent from Sesam Stasjon (Norwegian Sesame Street). Let’s be honest: he probably taught me more Norwegian than anyone else. 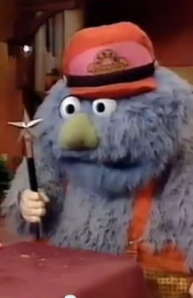 Because of this, I am not tempted to let Swedish or Danish into the Max Mekker Zone. It just doesn’t work.

Maybe I should watch the Co-Productions from Brazil and from Iberia, then? Worth a shot…

The mixing up of Germanic Languages occurs less and less often, but I think the Romance Language one requires instant address.

Speaking of Romance Languages, I do have some good news:

It took me a while, but I met someone at the Polyglot Bar last night—an American enthused with the Italian Language, and he managed to get me having my first Italian Conversation with my DuoLingo knowledge and occasional feeding of words and told me that my accent and that my word choice was very good!

I’m nowhere near confident, but it gets an upgrade!

Unfortunately, I might need to knock Portuguese down a notch on my language list until I’m more disciplined. So it isn’t among my best languages anymore (until I get more disciplined, that is).

Estonian is also showing remarkable signs of progress. This is because I have been studying it due to false hopes that Estonians would show up to the Polyglot Bar (lots of people told me that they had friends or acquaintances who spoke it), not also to mention its similarities to Finnish which makes it easier for me.

Anyhow…I’m ending the article here, but I’m raising a toast to my Spanish, Portuguese, and Brazilian accents…and no more mixing up things in Polyglot-ville!