I just uploaded my Day 30 video for Greenlandic on Facebook (the final installment for the 90th day will be a conversation with a native speaker. And before you ask, yes, I have access to them. Many of them, in fact).

But I can’t help but notice over the course of the past month that, with the exception of financial earnings (and, to some degree, even that), my motivation is virtually gone. It has gotten so bad that I’m not even motivated to have fun anymore, oddly enough.

What exactly is going wrong? 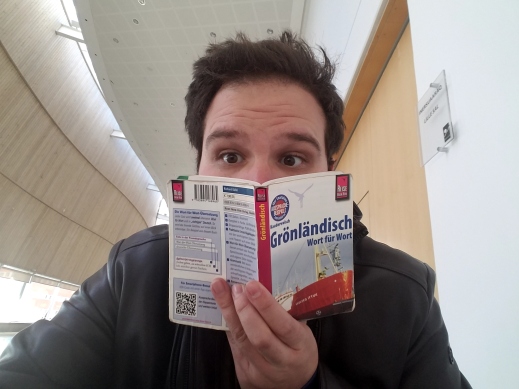 My retention from Memrise is virtually nil at this point, minus some occasional passive-understanding bonuses. It feels like a chore to me, almost, even for languages that I really, really want.

I remember when I was in Jewish school that there came a point in which I asked myself what the big idea about reciting the prayers every day was, given that I had recited them so often that I can (still) remember all of them. Now if only I could memorize OTHER languages with the same efficiency.

Which gives me another idea…

In Orthodox Judaism there is the idea that one should pray three times every day. A set of texts that are recited, partially out loud, partially silently, and also regulated by time constraints (the morning prayer, afternoon prayer and evening prayer all have to be recited at certain times).

Perhaps in some respects I should treat my phrasebooks like prayer books, and read through them, even silently, on a daily basis. That way, I can actively memorize a lot of the material very well even if I have only passive understanding of it.

I want to be a better game designer, better at understanding relationships at all kinds, better at connecting with people with whom I have nothing in common. I love languages, but sometimes I feel that too much of them blocks other areas of development in my life as well and I have to be conscious of that.

So what do I do know?

Well, on top of the 30-day Speaking Challenge which I’ll be doing tomorrow for Greenlandic and likely either Hawaiian or Tahitian (I’m leaning towards the latter), I think I should follow the prayer book routine at least for a while and see where it gets me. I’ll probably do it with my Greenlandic phrasebook, recite one portion of the book in the morning, another in the afternoon and another in the evening. (Like in the Jewish understanding, sometimes I can stack the afternoon and evening sessions back-to-back).

That way I’ll have everything memorized before I know it and internalized with the exact precision with which I remembered the prayers.

This should be fun.

See you in July!

Here I am watching as the sun sets over Bratislava and a thunderstorm appears to be in the works. I’ll walk outside and enjoy the twilight but first I’ll need to relate a bit about how things went from my perspective.

The fellow attendees at the conference were curious, accepting, not in the least bit critical, vulnerable and kind. Often in the “real world” I sometimes hear comments like “let’s continue in English because I speak English better than you speak my native language” (I know, right?)

But the way things appear at Polyglot Conferences, everyone has a series of ladders and it doesn’t really matter how far you up on them…or not…you are, as long as you have some drive to go higher or even taste a language for a little bit.

There were also great lessons in vulnerability. I saw in genuine action that fluency is not perfection (and come to think of it, I never heard almost anyone speak non-Native English without some type of grammatical mistake. AND THAT’S OKAY.

Corollary: it’s okay to speak any language non-natively with mistakes too, as long as you can communicate and patch your errors one-by-one, which may indeed take a lifetime or never fully get perfect, but that’s the beauty of learning, isn’t it?

In any case, I had a humbling experience realizing what it was like for people to present in their non-native languages. I was a lot more reserved. I was energetic and I second-guessed my grammar a lot. I thought “wow, the speakers of Yiddish and Swedish are gonna give me a bajillion dislikes when these videos come out”.

My first thought after concluding both was that they were disasters. But later on I then realized that despite sometimes fumbling for words, using too many filler words, or even sometimes making Norwedish errors in my Niuean presentation, that’s okay.

It was really the first time I’ve done it and it gave me a newfound appreciation for the many speakers of other languages who gave talks in English as well (and I think I can compare myself favorably with how they did).

I didn’t have the same quality of the “taking a class with Jared is like getting a drink from a firehose” that I have with classes I teach in English (and my classes in other languages are like that but they’re usually not filmed, which was the big issue in making me nervous. I’ve taught dozens of classes in non-native languages before, just not with a camera in front of me that was headed straight to YouTube. I even noticed that when the camera was off I became a lot more natural and less nervous.)

But I guess that’s okay.

My next project will be to improve my Greenlandic and Danish both substantially for the sake of  “Kaverini: Nuuk Adventures”, a task that will last ninety days at least.

Greenlandic I speak…okay but not well, and Danish I speak well but I’d like to speak better. I’d rate them as A2 and C1 respectively. I am already developing a plan to get a lot more Danish music as well so that I can create a full-fledged environment of being immersed in both languages (I already have a lot of Greenlandic music but I’m open for more suggestions, too).

The current challenge I’m doing is this one: http://mylanguagechallenge.com/

The requirements: film a 10-minute video after 90 days speaking your target language (or, should you choose the reading or the writing tracks, choose the appropriate avenue). I do have access to native speakers and a lot more than I thought was possible a week ago.

So here’s what happened.

I uploaded a video on Facebook of me speaking Greenlandic for a minute. A Greenlandic friend of mine asked to share it in a group, which he did, and then it became viral in Greenland generating hundreds of likes and I woke up with endless friend requests from all over Greenland (which I accepted because I’m making a video game about Greenland and because it is my favorite country, too!)

I got comments like “we should crowdfund his vacation here” or “he speaks better than most Danes who have been living here for a decade have” (this was something explicitly told to me by my host mom in Greenland. Info checks out.

Well this is going to be fun. Time for me to enjoy the Slovak twilight one last time for this journey.

Thanks for making all of this so memorable!