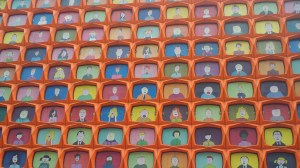 I get asked about learning several languages at the same time by many, MANY people. The common wisdom that curious souls tend to glean from forums is the following:

As for myself, I have a passionate soul and heart that pulls me in all directions and, as a result, am not one for following rules that I don’t have to follow.

I have no real principles that I steadily keep about simultaneous learning. The only principle I really have in this regard is “if you have a desire to learn a language (or to do anything, for that matter), act on it!”.

“But what about mixing up languages?” some of you may say.

Well, I do have tips about doing that. Looking at my list, there are highly similar languages, such as:

All of these, to make the problems even worse, are Germanic. But the only real ones I’ve ever mixed up consistently have been German and Yiddish! Those in the third category I have mixed up on…only a few occasions, and the second one almost never.

What did I do well with the Scandinavian Languages? Well, from the beginning I associated each one of them with highly different modes of speaking. As my first unofficial Swedish teacher told me: Norwegian is nasal, Danish is guttural, and Swedish is (like all things Swedish) in the middle.

The primary difference between Danish and Norwegian lies in the way they are spoken. The pronunciation differs very much (and Danish pronunciation has been known to scare students of Swedish just by merely mentioning the topic).

Oh, so the reason that I almost never mixed up these languages had to do with the fact that I had them categorized with different registers and feelings. One time on the “How to Learn Any Language Forum” I encountered a post that said that it was “not possible” to learn more than one Scandinavian Language because they were so similar. Well, obviously that isn’t true, because I’ve met people who can speak all three fluently. And if they exist, well, then it is possible…what is there to be said?

So what you genuinely need to do with simultaneously learning is ensure that you put languages on different emotional registers. Give them associations with a culture, with a mode of feeling…and, as such, mixing up words will seem like such a terrible intrusion that it won’t happen.

On a side note, I should also mentioned that I even mix up my native language with my other languages. Sometimes I’m thinking in another language and speaking in English and as a result I have to pause and configure a phrase or a word into something that would make sense more readily in English. (Recent examples of this included me trying to configure the German word “Missbrauch” and the Danish phrase “har lyst”).

Is mixing up languages the worst thing in the world? Not if it happens very infrequently. And I’ve noticed people of all nationalities do it at some point! What you need to do is minimize the chances of it happening by ensuring that you compartmentalize the various versions of yourself in each language so that they don’t intrude on each other more than they need to.

When you have that, you will realize that you can study all of the languages you want, without fear of mixing them up.