One fine evening in New York that probably wasn’t as cold as it is now, I was asked on not a few occasions if I had a favorite language.

As much as I love all of my commitments, the fact is that I cannot budget everything equally (and I think that almost no one can) and therefore I (and many other polyglots) do end up playing favorites by default.

Don’t believe me? Have a look at the tag categories above.

And should you have the good fortune to have read other blogs written by those who have learned multiple languages in adulthood, expect something similar: some languages are mentioned in their writing more than others, and it is clear that the levels are not all the same and that those that are the best are likely those that they put the most time into. 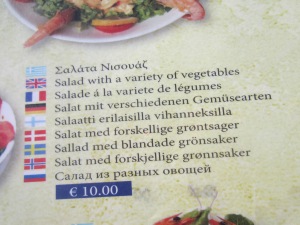 A Restaurant in Hania’s Old Town

That being said, I believe that there are multiple ways to choose favorites, and while I have no favorite language overall, I can say that I play favorites in specific categories.

And should you want to ask me for more categories, nothing is stopping you.

For one, most people who are not polyglots usually judge a language just by virtue of its sound. And concerning my favorite language sound-wise, there is a very clear-winner:

Norsk Bokmål, as spoken in Oslo in particular, has maintained an allure for me every since I first heard it in Stockholm. The fact that it is very closely related to English in many regards gave me further incentive to commit time to the project.

One thing I noted about Norwegian Language Learners is that they tend to hop right into native-level material (even if for kids) a lot earlier than learners of many of the common “high school” languages (Spanish and French being the best well-known).

About the sound: most people from the rest of Scandinavia note that Standard Norwegian has a unique rhythm that is reminiscent of a lilting song.

Many of my Swedish friends are very much enchanted by the language and call it “magnificient” and “wonderful” and many other varieties of praise-laden names.

I was also recently asked by someone if there are localizations of well-known animated classics into Norwegian. Yes. Very much so…

Then there is the system of a language, the way it works and the way words and sentences are formed. Again, a clear winner here:

When asked to describe how Kalaallisut (West Greenlandic) works, I will usually give people examples like these:

Nunavissuaq = continent (land + place where something is found or done + big)

Illorsuaq = mansion (you get the idea)

Illoqarfik = city, village (house + have + place where something is found or done)

Much like mathematics, virtually the entire language, minus loanwords (mostly from Danish) works in this fashion. There are suffixes that all have functions that you need to learn (not unlike mathematical signs).

Greenlandic is also home to my favorite word in any language, “qaqqaqaqaaq” (there are lots of mountains).

When I described this language to my mother (who only speaks English), she told me that the language “sounds easy”.

There are only two real difficulties with Greenlandic: (1) relative lack of learning materials (especially if you don’t know Danish) and (2) the fact that it is very much different from any language that is commonly studied (i.e. don’t rely on any cognates whatsoever, unless you have studied other Inuit languages).

And here is the language as spoken by Paul Barbato, an American (watch the other videos in the channel for the backstory):

Another important aspect is taste, and this time there is no clear winner, and I would tie Danish and Yiddish for first place:

Much like German and Dutch, Danish is also heavily insulted by many just by virtue of its sound. Drunk Norwegian is one of the tamer names I’ve heard, with the harshest being the unfortunate but memorable “Danish sounds like vomiting”.

Of the languages of Europe that are spoken by more than 1 million people, the two that are most closely related are Danish and (Standard) Norwegian. The written languages in particular are very close, but as one of my Swedish friends said, “I can read Danish, but when spoken, it sounds as strange to me as Chinese”.

As to Yiddish, it is probably the West Germanic Language that gets insulted the least but made fun of the most.

I have written on both of them here and here.

And now as to the languages that changed my life the most:

Greenlandic enabled me to glimpse the culture of an island that everyone on the planet is familiar with but tend to not think of as a place where people live. The “push-pull” between the Inuit and Danish spheres of influence is a source of creative tension that powers the entire culture of the country. I myself am vegetarian and I dread the thought of seal meat. What I do not dread, however, is the world that opened up to me as a result of my venture and how it changed the way I see everything in the Americas in particular.

Yiddish is also a tension between many European elements and the cultures of the holy tongue (as far as Yiddish is concerned, this is a blend between Hebrew and Aramaic). It also enabled me to understand my culture in a way that most Jews today just cannot fathom, not just as texts or politics or prayers but as a way to taste life—a flavor concocted from too many lands to list.

As to Finnish, J.R.R. Tolkien taught himself the language and likened it to a wine cellar that few people venture into. The languages that he (make that “we”) created share influences from this language (What’s it with Finnish enthusiasts creating artificial languages? There must be something in it…as we would say, “katsokaa itse!” [see for yourself!]).

But most people associate Finnish with “being difficult” and little else.

And it is a shame…because Finnish has a tendency to be quite absurdly logical most of the time. I have never heard Hebrew described as an immensely hard language…

As for Modern Hebrew itself, it is a cultural salad, not unlike Yiddish, Dutch, and Estonian (and definitely many other languages about which I have scant knowledge).

Before Modern Hebrew, the language was merely something scriptural, something used for prayer.

After Modern Hebrew, it became the result of a grand experiment as to what would happen if you took a holy language and let it travel the world for a long time.

The result makes you think more about how a language can evolve, and where our languages are going and where they could go.